What Is The Eucharist?

The Eucharist also known as Holy Communion, is a sacrament. In the New Testament, the rite was instituted by Jesus Christ during the Last Supper; giving his disciples bread and wine during a Passover meal, he commanded them to "do this in memory of me" while referring to the bread as "my body" and the cup of wine as "the blood of my covenant, which is poured out for many".

During the Penal Laws in Ireland – in particular during the 18th century – the Catholic church was oppressed and public ceremonies involving Catholic clergy were banned. Many Catholic churches had also been either destroyed or put to use by the Protestant Church during the period following the Battle of the Boyne (1690).

Nonetheless, Irish Catholic remained faithful to the celebration of the Mass and two new traditions emerged: the Mass rock and the Station Mass. Catholics gathered in the open countryside at a designed spot marked by a rock to celebrate Mass. Usually, the priest arrived in disguise and placed the sacred vessels on the rock while assigned locals kept a look-out from vantage points in the landscape from where they could see any approaching English militia. 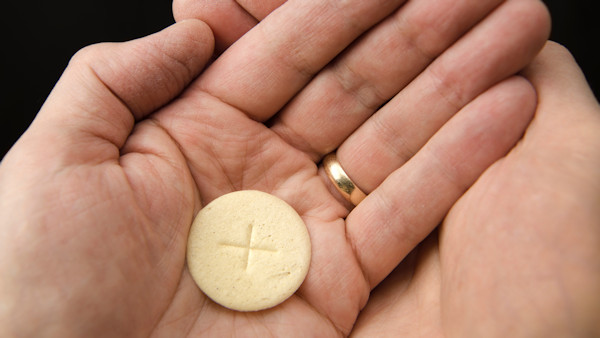 The Irish countryside is still littered with these Mass rocks and they are still considered to be special sacred places. The alternative venue for Mass was in people’s homes. Word was put about locally that Mass would be said in a particular house on a particular day. The neighbours would gather for what was often the only opportunity to be at Mass for a long time. Because it was not safe for the priest to carry sacred vessels or vestments with him on his journeys, these were taken care of by the local people. They passed the “Mass kit” from house to house as it was needed.

This Mass became known as the “station Mass” because of the random movement from place to place. In some areas, some houses became known locally as regular venues for Mass and became known as Mass houses. More of these emerged as the Penal Laws were repealed but the Catholic community still did not have resources to build enough churches. Gradually, during the first half of the 19th century, churches were built across the countryside to replace the Mass houses.

Following the repeal of the Penal Laws and the passing of Catholic Emancipation (1829), Catholics were free to worship publicly and take their place in civil society. However, the spread of church buildings with adequate accommodation was slow. Hence, the tradition of the Station Mass continued.

Even when each community built its own church building, the Station tradition was kept alive. The two-part focus of having the celebration of Mass in one’s home and an occasion for special hospitality to the neighbours combined to highlight two key strands of the Catholic faith in Ireland. Until the 1970s, the Station Mass was always held in the morning and was followed by “breakfast” for the priest and neighbours. The Station was preceded by weeks of preparation including painting, wall-papering, cleaning and shopping!

The social changes of recent decades have forced change on many aspects of the tradition around the Station Mass. However, the tradition remains strong in may parishes.

In the past, most parishes had a rota of parishioners who hosted the Stations and each family knew when their turn was coming. Today, people simply volunteer to host the Station by contacting their local priest. The Stations are almost always celebrated in the evening now at a time agreed between the host household and the clergy. This is then announced locally. Apart from the table to be used as an altar, all the principal necessities for Mass are provided by the priest. The household usually provides:

Often, the presiding priest will invite members of the family or the local community to participate in the liturgy by reading, singing or leading prayers.

In the rural parishes of this diocese, the community supports the local clergy financially by a special collection taken up during the time of the Stations in each area. Each household is invited to make a confidential contribution either after the Mass or by sending it directly to the clergy. In some parishes, special envelopes are provided in the weeks before the Station Mass. (The amount contributed by each household is kept confidential.)

The pattern of what happens after the Mass varied a lot from parish to parish and from house to house. In some places, each household contributes food which is shared. Some parishes have established a norm that tea and scones or sandwiches are prepared are served. In some places, a more elaborate fare is prepared and neighbours spend the night in a social atmosphere.

In a changing Ireland, the Station Mass can be a real and meaningful opportunity for the local Catholic community to extend a welcome to new neighbours. In some parishes, the host family makes a special effort to personally contact each neighbour to invite them to their house for the Station Mass and hospitality. But just because you may not be asked that personally doesn’t mean you are not welcome! Everyone is welcome at the table of the Lord.