Archbishop Diarmuid Martin of Dublin has said he hopes that a new exhibition on the role the Church in the 1916 Rising will provide a “unique glimpse” into the hearts of those who ministered and those to whom they ministered.

Speaking on Friday evening at the official launch ofMinistry Advocacy and Compassion at St Kevin’s Oratory in the Pro Cathedral in Dublin, the Archbishop said he also hoped that the exhibition would be an encouragement to all to ensure that the Ireland which we transmit to coming generations would be one which the leaders of 1916 would be truly proud of.

The Archbishop and the Minister for Education, Richard Bruton, officially launched the unique audio visual exhibition chronicling the role of the Church in the events of 1916.

For the first time, historical documents from the Dublin Diocesan Archive are on display alongside material from many religious orders who were at the centre of events in Easter Week including the Capuchins, Dominicans, Franciscans, Irish Sisters of Charity, Jesuits, the Loreto Sisters and the Sisters of Mercy.

In his address for the opening, Dr Martin said the exhibition takes people into the hearts of the fighting during the Easter Rising, where Catholic priests risked their lives to minister the Sacraments to the wounded and dying.

“It examines the crucial acts of the nuns and clergy, as they responded to the immediate needs of the hungry and displaced by providing them with much-needed food and shelter and includes eyewitness accounts of those who ministered to the condemned leaders.”

Acknowledging that the exhibition could be described as a niche exhibition, he said it gave a glimpse of an aspect of 1916 which could well have been overlooked by the commemorations of the bigger picture. 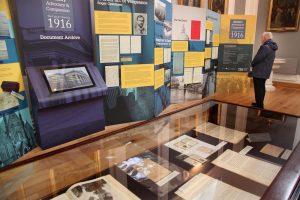 “It is about the ministry of priests especially here in Dublin city centre who came into direct contact with the 1916 leaders at the beginning of the Rising and at the tragic moments of their successive execution and their burial.”

For the Archbishop, the most significant dimension of the exhibition is the “fleeting glimpse we have of the state of mind of the leaders as they faced death”.

“The notes of those who ministered capture moments that are not otherwise recorded.  There is the tragic description of the personal anguish of Padraic Pearse, which Capuchin Father Columbus Murphy noted when he was authorised to visit Pearse in Arbour Hill. He found Pearse with his head buried in his hands in anguish saying ‘Oh Father, the loss of life, the destruction, but please God it will not be in vain.’”

“We have in the exhibition the short note issued by the military authorities authorising that visit, granted as Father Columbus noted with no great magnanimousness and generosity with General Maxwell commenting: ‘Oh but we will make the beggars pay for it.’”

There is also a striking report by the Chaplain to Arbour Hill, awoken in the middle of the night, and hearing already in the distance the shots from Kilmainham Jail and then just thirty minutes later watching the bodies arrive still “warm and dripping of blood” to be buried hurriedly in an open grave and covered in acid.

“The story of this ministry could easily have been overlooked because these priests and religious – about whom we know little of their personal political allegiance – carried out with simplicity and without fanfare a ministry which they could never foreseen,” Archbishop Martin commented.

He added that the exhibition is also a tribute to the priests of Dublin and who minister in Dublin who serve with generosity and commitment to ministry in whatever circumstances they find themselves.

There are other exhibits which chronicle the dramatic destruction that took place, especially in the O’Connell Street area.

“It is interesting to note that the Pro-Cathedral is the only building in this area still standing as it was in 1916, having been saved by a change of wind from the violent fires that ranged around the neighbouring buildings,” the Archbishop said.

There is an account of Padraic Pease’s happiness that James Connolly has made his peace with God and Connolly’s appreciation of the work of the priests and nuns who ministered in those dramatic days and also glimpses of Connolly devotedly receiving Holy Communion in the days before his execution, as well as details of the brutality of Connolly’s execution.

“Please God it will not be in vain” was the hope of Pearse.

Make a Secure Donation to the Diocese of Cork & Ross

LOOK AHEAD TO THE READINGS AT MASS

Cork and Ross Friends and Family in Faith

Any cookies that may not be particularly necessary for the website to function and is used specifically to collect user personal data via analytics, ads, other embedded contents are termed as non-necessary cookies. It is mandatory to procure user consent prior to running these cookies on your website.